The Brunei Gallery – part of the School of African and Oriental Studies – hosted (or I should say is hosting; doesn’t close until 23 September) an exhibition on what is described as

I know very little about the Sikh empire so was happy to accompany the Book God and learn what I could, especially as we had recorded (but not yet watched) a BBC documentary on Maharajah Duleep Singh – more about that later – so the timing seemed fortuitous.

The exhibition was really impressive, with a range of artefacts from an enormous decorative cannon to beautiful miniatures and exquisite jewellery. There was also a really helpful and well-designed timeline on one of the walls which described the key events in the development and history of that part of India against what was happening elsewhere in the world at each stage.

Maharajah Ranjit Singh – The Napoleon of the East, he set up a modern army which included a number of Europeans. Members of his army served under strict conditions including growing a beard, not eating beef, not smoking and marrying locally. Some of the European soldiers had served with Napoleon and joined the army after his defeat.

The Koh-i-Noor – the exhibition includes a replica of the diamond in it’s original setting, showing how large it was before Prince Albert got his hands on it and had it re-cut for Queen Victoria.

Maharajah Sir Duleep Singh – he came to the throne when he was five years old, was kidnapped and controlled by the British government in India before being exiled so that he would not become the focus of rebellions against British rule. He understandably had an unhappy life, converting to Christianity and then back to the Sikh faith, railing against his appalling treatment at the hands of the British. He died relatively young at the age of 55. His story is told in a documentary recently shown on the BBC [The Stolen Maharajah: Britain’s Indian Royal] sadly not current available on the iPlayer. We’re not very good at accepting our awful behaviour as an Imperial power, and it’s right that we are made to see how shabbily we treated him. 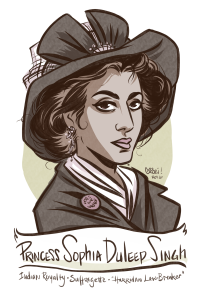 Princess Sophia Duleep Singh – my new girl crush. A god-daughter of Queen Victoria, she lived in a grace & favour apartment at Hampton Court Palace for many years. She is best known as an active member of the Suffragette movement alongside the Pankhursts, and was notoriously arrested several times for refusing to pay taxes without having the right to vote. She fascinated me so much that I bought Anita Anand’s biography of her [Sophia: Princess, Suffragette, Revolutionary, Bloomsbury 2015]