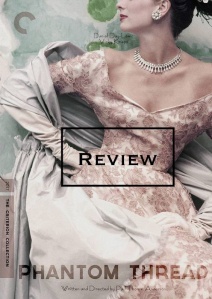 I love all things fashion so was very excited to see this film. Unfortunately, I missed it in the cinema but treated myself to the DVD on release and I’m so glad I did. It was very much worth waiting for.

Phantom Thread is set in the world of couture in London in the 1950s. Reynolds Woodcock (played by Daniel Day-Lewis) is a renowned dress designer who is famously difficult and requires his home and working space to be rigidly ordered to his particular requirements. Supported by his sister Cyril (the amazing Lesley Manville), he is captivated by a succession of young women who act as his muse, but who are despatched by Cyril once Reynolds inevitably becomes tired of them. Into this set-up walks Alma (Vicky Krieps), a very different type of young woman willing to stand up to Reynolds and his frequently appalling behaviour.

This is a beautifully constructed film. We are quickly brought up to speed with the type of man Reynolds is; a self-absorbed creative talent who uses his position as an artist to get away with demands and behaviour that would be completely unacceptable elsewhere. Obsessed with his late mother, reliant on the practical skills of his sister, he favours young women with his attention until boredom hits and he dismisses them out of hand. When Alma is brought into the household we expect the same pattern to repeat itself, but she is more than capable of holding her ground and will not go willingly. Over the course of the film the two of them battle for supremacy and eventually reach a solution which to my mind is rather drastic but seems to satisfy them both.

The acting is, as you would expect, wonderful; the whole cast seems to thoroughly enjoy delivering a succession of fabulous lines with an air of waspishness which I loved. And of course the clothes are so sumptuous and beautiful I could stare at them for ever. I would love to see them exhibited somewhere but not sure if that will ever be on the cards.

I also absolutely love House Woodcock, a combined living, working and selling space which would suit me to a tee.

If you are interested in fashion and want to experience overbearing masculinity subtly put in its place in a somewhat Gothic setting then I recommend this highly.