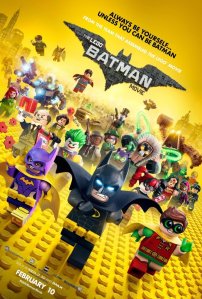 It’s Batman, Jim, but not as we know it. Or as IMDB would have it:

A cooler-than-ever Bruce Wayne must deal with the usual suspects as they plan to rule Gotham City, while discovering that he has accidentally adopted a teenage orphan who wishes to become his sidekick.

Batman learns an important lesson about teamwork.  That is all, but more than enough 🙂

It’s an interesting fact (to me at least, YMMV) that I have always preferred DC comics to Marvel but of course prefer the Marvel movies to those from DC. Apart from Wonder Woman which was and will forever remain awesome.

You will not be surprised to know that The Lego Batman Movie is the exception to this rule. It is a huge amount of fun, with one of the best iterations of Batman ever. It is full of amazing set-pieces all rendered in overwhelmingly bright colours with a catchy theme song over the end credits (though not as catchy as Everything is Awesome – I only have to hear (or type) the title to have that song stuck in my head) and so much detail that you don’t really know exactly where to look in case you miss something.

The voice cast is astonishingly strong but of course Will Arnett is the standout as the Bat, with Ralph Fiennes a very close second as Alfred. We missed this in the cinema but were able to watch it at home over the Christmas break and could not stop giggling.

Favourite quotes (the ones I remember, after all there are SO MANY every second):

Okay, Robin. Together, we’re gonna punch these guys so hard, words describing the impact are gonna spontaneously materialize out of thin air.

The creators of the recent incarnations of the DC universe could learn a lot from this film, especially in relation to dialogue. You may not want this many jokes but the script is clever and entertaining without getting in the way of the action.

Dazzling details: The Lego Batman Movie was directed by Chris McKay, is 104 minutes long and is certified U – suitable for everyone unless you are offended by mild comic violence, rude humour and/or very mild bad language

3 thoughts on “The Lego Batman Movie”