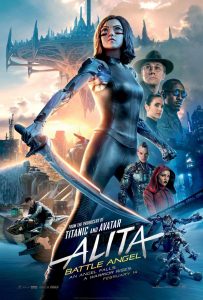 Long in the planning (like a lot of James Cameron’s stuff these days) and directed by Robert Rodriguez, Alita: Battle Angel finally hit our screens in February. Although I was aware of the manga on which the film is based I really didn’t know anything about the story line other than, of course, that her name was Alita and she was, um, a battle angel. So turning to IMDB:

A deactivated female cyborg is revived, but cannot remember anything of her past life and goes on a quest to find out who she is.

What they mean by deactivated is that Christoph Waltz finds her head and a bit of her upper torso in a dump, attaches her to a body he had built for other purposes and voila, Alita is up and about.

We were really keen to see this movie because of the original trailer which looked exciting and fast-paced, but were almost put off entirely by the dull, boring and earnest infomercial (if that’s what they’re called) where Cameron & Rodriguez patted each other on the back for making the film. I hate the trailers/adverts where the stars and/or directors talk to the audience about the film – they are almost never enticing.

Anyway, we saw Alita in 2D because that’s the way I roll, and I have to say that we really enjoyed it. I thought it was going to be a disaster because (1) the Odeon whooshy thing that they play before the programme starts had its soundtrack replaced by light opera (!), (2) the house lights didn’t go down and (3) after the BBFC advisory card everything on the screen went blank. After a computer reboot everything was OK; have to say the staff at the Rotunda in Kingston were really helpful and got it all sorted as soon as they could AND we didn’t need to sit through the adverts again, but I do miss the das of a proper projectionist.

I also thought I might be put off by the aesthetic used for Alita herself (the very large eyes in particular) but Rosa Salazar did a really good job bringing her to life and after a very short period I just didn’t notice it any more – that’s just what she looked like, NBD.

The plot is no great shakes; revived cyborg meets boy, he is not what he appears, she isn’t what she appears and there are villains after her for reasons that become mostly clear as the story progresses. There’s a Rollerball-adjacent game and a lovely cyberpunk look to the movie – parts of it are genuinely beautiful – but the ending doesn’t really provide much of a conclusion, instead setting us up for a sequel which I for one would like to see made.

Big shout-out to Mahershala Ali as one of the bad guys. I’m currently watching him in True Detective S3 and it was fun to see him being all cool and villainous.